Architecture studio Foster + Partners has designed an Apple Store in the heart of Istanbul that is flanked with two stone walls.

Located on Istanbul’s Bagdat Caddesi, a busy shopping destination in the centre of the city, the store is technology company Apple‘s third retail location in the city. Its first store in the city opened in 2014 in the Zorlu Centre.

Foster + Partners set the store back from the street and built a column-free, two-level structure with a fully glazed facade. From street level, the store appears as though it is a single-storey building topped with an overhanging roof.

The interior is flanked by two large walls built from local travertine stone while floor-to-ceiling glass connects the two walls to form the store’s facades.

The entrance to the store was placed at the centre of the glazed wall and was marked by an illuminated Apple logo.

Aksaray Yaylak Granite stonework, used across the street’s paving, was continued through to the interior of the store to create a “gentle transition” into the space as well as a visual connection with the street.

Three rows of tables were placed on top of the street-paved floors and recessed display units were built into the travertine walls hosting Apple’s latest products.

Glimpses of a tree-lined view at the rear of the store draws visitors to a large double-height space that is framed by a rear, 9.7-metre glazed wall. 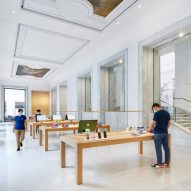 A large stone staircase, also made from local travertine, was built along the right side of the store and leads visitors to the lower level that houses a forum-style space.

The double-height space looks out onto the tree-lined gardens that surround the store, while a concealed lower level I located under the ground floor space.

Publicly accessible green spaces were organised along three sides of the store, with the rear garden enveloped by a tall green hedge.

The building was topped with a green roof to insulate the interior as well as a rainwater harvesting system for the irrigation of plants and the recycling of used water.

Foster + Partners has designed numerous Apple Stores. These include a store in Downtown Los Angeles within an abandoned 1920s movie theatre and the conversion of the Palazzo Marignoli into a store that highlights$ its historic details.

The photography is by Nigel Young unless stated otherwise.

The 8 Zoë Kravitz Basics I'm Adding to My Cart